Moloney Racing has commenced a new era. With a stable primarily of young horses, John and Gerard Moloney are very enthusiastic about the next phase of activity from their training base, Vain Lodge, at Caulfield.

Their work sits on a foundation of two successful previous generations of Moloney horse trainers, including their father, the late Jim Moloney, who is in the Australian Racing Hall of Fame. 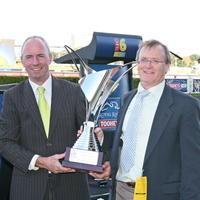 John, who secured his training licence in 1981, and Gerard, who followed suit in 1985, offer the hands-on service which comes with a middle-sized stable. With 30 boxes, they know every facet of their horses, and use their skills and experience to cater for the most docile of thoroughbreds, and the most difficult, and every horse between.

This first-hand knowledge of each horse is an attractive element to owners.

John and Gerard have no need to rely on stable staff when preparing reports and updates.

John and Gerard also have a proven record of successful placement of horses in races where they can be competitive, be it metropolitan or provincial meetings

It is quite a rare day when Moloney horses finish further back than mid-field; they are usually competing in races suited to their capabilities.

Moloney Racing currently trains horses by popular top stallions such as Americain, Artie Schiller, Sebring, Not A Single Doubt, Street Boss, Danerich and Makfi, plus a series of other strong bloodlines.

They are always on the lookout for new business, new owners and new horses to become involved in the great ride which can arise on the track.

Another strength to the Moloney business is the ability to call on the services of top jockey Patrick Moloney, Gerard’s eldest son. Patrick rides trackwork most mornings, and naturally knows what makes each horse produce its best. He is regularly in the saddle for jump-outs and trials.

Patrick’s raceday contribution is joined by the engagement of other leading jockeys when necessary or if Patrick has a prior engagement to another top stable.