Chelsea Hall delivers in May 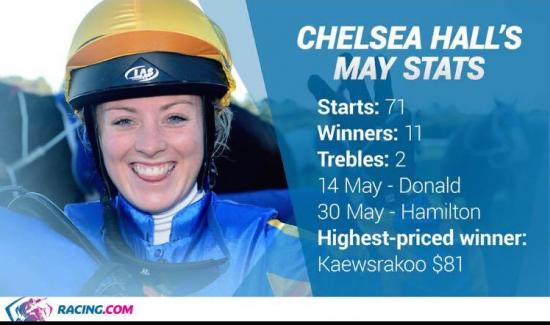 Moloney Racing has recently had the pleasure of having young second year apprentice Chelsea Hall working at the stables. Chelsea has came to Moloney Racing on loan from Terry O Sullivan and has ridden a total of 56 winners.

In the month of May, Chelsea tallied 11 winners for the month from 71 rides at over 15 per cent including two trebles, and her form has been exacerbated by some of the prices of her winners - Linka ($61) and Kaewrsakoo ($81) both saluting with Hall in the saddle. Chelsea also rode her first winner for the stable in May, when talented young gelding Dark Ensign saluted at Geelong.

We look forward to working with Chelsea in the future and hope the winners keep on coming!