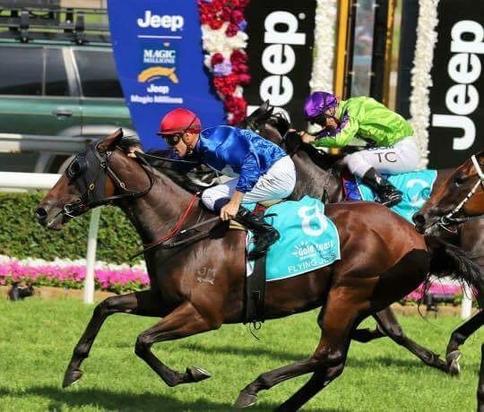 We are now on the eve of the greatest week in Australian Racing with the four days at Flemington ready to kick off this Saturday with the running of the Group One AAMI Victoria Derby.

Moloney Racing are without a runner in the Derby but are well represented at the meeting having two runners on the card, firstly with Give in the Group Three Carbine Club Stakes over 1600m for the three year olds in the opening event and the highly talented Flying Jess contesting the Group One Myer Stakes over 1600m for fillies and mares carrying number one saddle cloth, race six on the programme.

Moloney Racing enjoyed a successful month in October training two winners firstly with Magellan on Moe Cup Day and then the highly impressive Black And Tan at Ballarat just on a week ago.

Black And Tan especially looks to have a very bright future hitting the line hard and can certainly be back in the winners stall at her next start.

Back to Saturday and Give looks a nice sneaky little each way chance in the opening event drawing barrier eight with Patrick Moloney to ride.

Give was only beaten just over two and half lengths at Listed level at his last start and with drawing a good gate on Saturday and heading to the 1600m he certainly can improve and figure in the finish.

We wish long time supporting owners of the stable in John and Paul Shannon the very best of luck and hope Give can poke his nose out where it matters.

The ever consistent Flying Jess is chasing Group One glory in the Myer Stakes this Saturday and she only needs an ounce of luck to be doing this.

Flying Jess has raced four times this campaign for three narrow seconds all at group level and deserves to break through on Saturday as there is no horse in Melbourne racing more consistently than her.

Flying Jess does have the awkward barrier draw of 15 but with Magic Millions winning jockey Tye Angland aboard, he will give the mare every chance to cross over, find a position and be storming home late.

We wish John Moloney, his racing team and Prime Thoroughbreds headed up by Joe O'Neill the very best of luck and hope Flying Jess can capture Group One Glory!

Also watch out for Pay Up Bro in the Grey's race on Oaks Day and Orient Line over 1400m on Final Day.

In other stable news it was great to see stable apprentice Chelsea Hall out ride her country claim during the week and we wish Chelsea the best of luck over Cup week where ever she is riding and hope the summer months ahead bring her plenty of winners.

Across to Friday night at the Valley Moloney Racing are represented by Liberty Song in race five and the VRC St Leger winner in Dornier in race seven with Shaanxi City in race 2 being a likely scratching.

Good luck to everyone concerned there.

In closing we wish everyone the very best of luck for Cup week.

May you have plenty of success, cheer hard for all of the Moloney Racing runners, keep safe and enjoy!