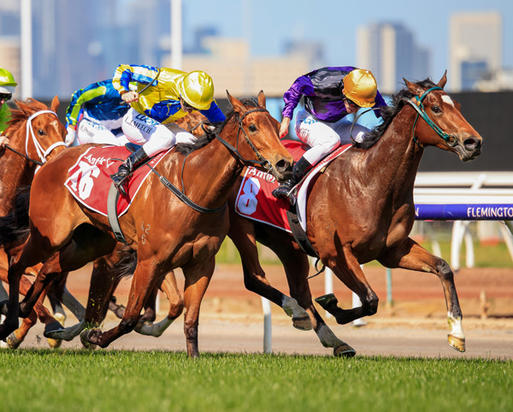 Promising 3-year-old, Legionnaire, gained many admirers on Saturday when he broke through for his maiden win in the Listed Exford Plate at Flemington on Saturday over 1400m, at his sixth career start.

Perfectly ridden by Jamie Mott, the Stratum gelding settled down just behind the leaders after a quick beginning, and was able to quicken far superiorly than his rivals once he saw daylight in the home straight.

With the Group II Reisling Stake winner, Tenley, running on into third place, it was an exciting win for exemplery clients of Moloney Racing, Julie Sampson and Meridy Taite, who bred Legionnaire from three-time Melbourne winning mare, Matron (O'Reilly), who is a daughter of the talented Gawne (a 3/4 sister to Group 1 winner Great shot).

John Moloney went into Saturday's race quietly confident that the maiden galloper would run well, and that his recent form suggested that he wasn't far off the better horses in the field.

Although initially disappointed that Legionnaire wasn't payed up for the Caulfield Guineas, John thinks it could be a blessing in disguise. Preferring to place the gelding in whatever race he can fit him without overdoing him, John believes that the immature gelding will appreciate more time to strengthen and develop beyond this preparation.

Congratulations to Julie and Meridy, as well as all of the team at Moloney Racing!!