Big Night Out For Imperial Lad 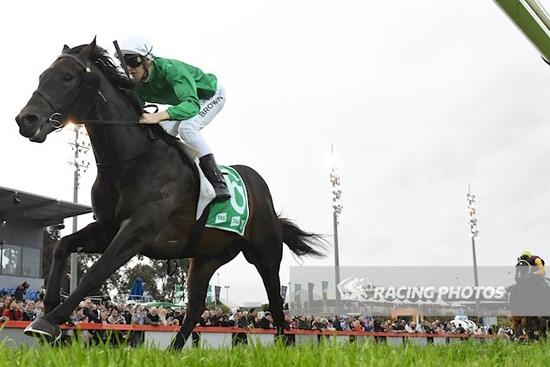 It was celebrations all around on Saturday night at the tri-code meeting at Cranbourne, when Imperial Lad brought up an impressive win to break his maiden status at his eighth-career-start.

The consistent three-year-old, who had previously placed five times out of seven starts, was perfectly placed in the 1300m maiden by John Moloney, and he proved far too good for his opposition with a cool, confident ride by jockey, Ethan Brown.

After beginning well from a wide barrier, Brown elected to cuddle the All Too Hard colt and settle him down midfield and out of the early speed-battle up front. With a cushy run three-wide with cover, the colt began to tow Brown into the race from the 600m mark, sweeping around the field, and never looking a danger of being beaten in the home straight.

Still showing signs of greenness in the concluding stages, and wanting to run a bit wayward when he hit the front, the colt was straightened by Brown with the persuader in the left hand, and driven through the line for an impressive win, running away from the rest of the field on the line.

Now off to the paddock for a mini-break, we hope to see "Sharkie" return with new found confidence from Saturday's win, and plenty more wins in store for all of his wonderful owners in the future.

Congratulations to everyone involved and all of the hard-working staff at Moloney Racing!