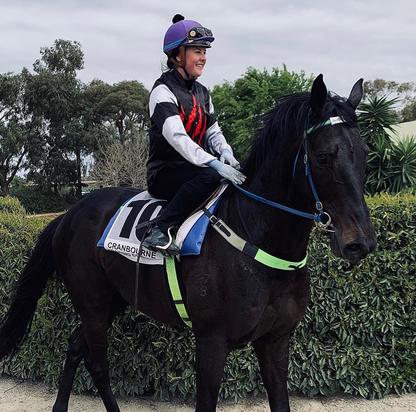 Moloney Racing apprentice, Tayla Childs, will have her long-awaited race-riding debut at Mornington on Monday, partnering the John Moloney-trained, Black Opal, in the last race on the card, the "Neds Price Boost Handicap" over 1000m.

It has been a long road for Childs to get to the races since the beginning of her apprenticeship back in February of 2018. Having suffered three separate forced outings from injuries, including a shattered kneecap, a fractured ankle and back, and most recently, a broken hand, she has lost well over a year in the saddle. Though clearly Childs hasn't lost any enthusiasm or drive to be a jockey, she credits her support network of family and friends for keeping her going through tough times.

Childs carries a name synonymous with racing. Her father, Greg, is a champion former-jockey, well known for his association with the great mare, Sunline, and twin brother, Jordan, is a Group 1 winner in his own right. Childs' mother, Diane, was also a jockey. Between the three of them, Childs has three of the most supporting mentors possible, not to mention a bloodstream running hot with talent.

"I couldn't have had any better support. They watch every trial and jump out I ride in, and offer feedback and help when I need it," Childs said, "Dad and Jordan are definitely who I go to when I need advice, and I'm also lucky to be coached by Darren Gauci and Alf Matthews through the Victorian Apprentice Academy."

Outside of racing, Childs comes from a background of equestrian riding, having competed at a high level in eventing. Her days of competing are now over, as she focuses on her jockey apprenticeship, though in the rare downtime that she gets, she enjoys heading home to her parent's property to ride her horse and put him over a few jumps.

Childs describes being indentured at Moloney Racing as being a huge advantage to her development, to be under the tutelage of a trainer like John who still rides a lot of his own track work.

"John has been a huge help and I'm blessed to have a boss that I can ride alongside most mornings. If I'm doing something wrong, he will tell me!"

"Being based at a track like Caulfield where there are a lot of great jockeys around to help me out at jump outs, is also a huge plus."

Childs was excited to get the news from Moloney on Thursday that she would be partnering the last start winner, Black Opal, at Mornington.

"I'm so excited, it's been a long time coming. After a few set backs, it's great to finally have my name in the race book and get out there on Monday. He won last start on a heavy track, so we are hoping for a bit of rain. Being in the last race, hopefully the ground will be a bit chopped up which will work in our favour. He is a jump-and-run horse, so our plan is to let him roll along and keep him happy."

Unfortunately, under the current COVID-19 legislation and the protocols implemented by Racing Victoria, Diane and Greg will have to cheer on their daughter from home. Jordan, who rides in the same race, won't even be able to walk the track with her beforehand due to him being in the "Green Team" of jockeys, a group selected for stricter isolation measures.

"They (family and friends) have all been so patient for me to get to the races, and now they can't come which is frustrating. I won't get to see or speak to Jordan until we are on our way to the barriers, but it's just good to know that he will be there."

Childs will tick off her short-term goal when she jumps out of the barriers for the first time under race conditions, and long-term she is determined to keep improving all the time and outride her claim. There is also plenty of healthy competition within the Childs family, and even more incentive for Childs to work hard.

Now the deal is even in print!

Good luck Tayla, from all your friends at Moloney Racing!