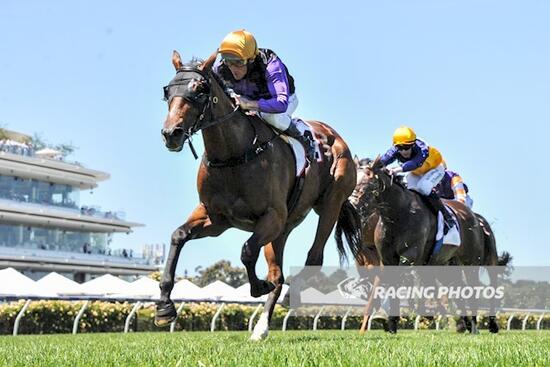 Emerging talent, Milton Park, continued a stellar week for Moloney Racing on Saturday at Flemington, taking out the 1400 metre "The Mumm Royale" with champion hoop, Damien Oliver, in the saddle.

Continuing on from Imperial lad's dominant win at Ladbrokes Park on Wednesday, and The Regiment's back-to-back victory on Thursday at Geelong, Milton Park put the writing-on-the-wall as a star on the rise with his superior first-up performance.

The addition of blinkers proved key to the Written Tycoon gelding's performance, with Oliver suggesting the shades go on after partnering the three-year-old in a jump-out at the beginning of this campaign.

Settling the free-striding galloper in the box-seat during transit, Oliver was able to gain clear running at the 400 metre mark before driving the still "green" galloper to the line to win by 1.8 lengths.

With 3 wins from 6 starts, Milton Park looks to be an exciting horse on the way up for long-time clients, Julie Sampson and Meridy Taite.

Congratulations to Julie and Meridy and all of the hard-working team at Moloney Racing!