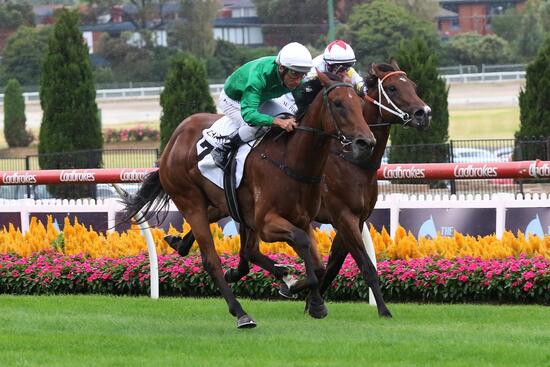 Scorched Earth burned the turf at The Valley on Saturday, proving too strong against her two-year-old peers, including two $1.1million colts, in the $150,000 Listed Valley Pearl.

A $90,000 Magic Millions purchase, the Nicconi filly notched her second-career-win from four starts, following on from her dominant last start win at Murray Bridge in the Magic Millions 2yo Classic, which was subsequent to her eye-catching second placing in the G2 Blue Diamond Prelude back in February.

Keen to ride Scorched Earth since he trialled her at the beginning of her preparation at Geelong, Damien Oliver took over the reins on Saturday and produced a copy-book ride on the filly.

Settling her down beautifully one-off-the-fence behind the leaders, Oliver produced the two-year-old to the outside on the home bend and Scorched Earth was seemingly effortless in her ability to change gears and accelerate to the line, running down Dio to win by three-quarters of a length, with Wizard of Oz three lengths away in third place.

Scorched Earth will now be sent to the paddock for a well-earned rest, with high hopes that we have something special to look forward to in the coming Spring.

Congratulations to the wonderful connections of Scorched Earth, and all of the team at Moloney Racing!