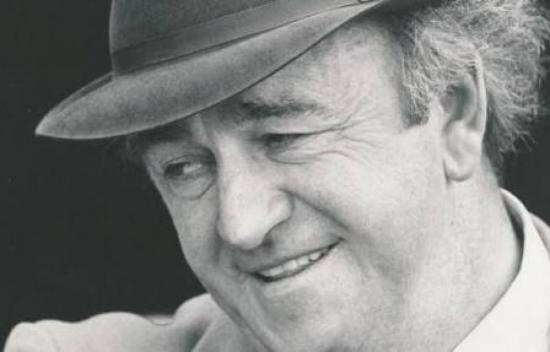 Racehorse trainer Jim Moloney was inducted into the Australian Racing Hall of Fame in May 2015. If there was a Hall of Fame for Gentlemen, Jim would have been included decades earlier. He was involved in racing at the highest level for over 60 years. During his career he became a guide and mentor to his great mate, jockey Pat Hyland, and many other apprentice jockeys, with his quiet, sound and methodical advice.

The son of a successful trainer in western Victoria, Jim left his Warrnambool home in 1956 with wife Pauline to base the training business at the Epsom complex, now long swallowed by housing near Mordialloc. While progressively adding to their family (seven children), and with Hyland as boarder, Jim worked his way through the training ranks patiently and steadily.

Swynphilos, winner of the Newmarket Handicap in 1965, provided him with a big thrill. In over 30 years with Hyland as the Moloney stable jockey, their partnership with champion sprinting horse Vain was the highlight. The colt raced 14 times in Melbourne and Sydney for an extraordinary 12 wins and two seconds.

Vain set an Australian stakes record in his two-year-old year, winning six of seven starts. He won the Golden Slipper Stakes of 1969 by four lengths. Prior to the autumn's Sires Produce Stakes, Sydney's heavy conditions severely impeded Vain's trackwork. His colours were lowered by Beau Babylon, ridden by Roy Higgins. It was to be his only loss with Hyland in the saddle.

Vain won the Champagne Stakes, Beau Babylon ten lengths in his wake, in the fastest time ever recorded by a two-year-old over six furlongs. At three, Vain won another six of seven races. After his win in the 1969 Ascot Vale Stakes, Hyland was suspended. Higgins rode in the Moonee Valley Stakes when Vain finished second to Daryl's Joy, later a successful sprinter in the US.

Hyland returned for the Caulfield Guineas and Vain won in another race record time.

Then came a stunning 1969 Melbourne Cup week for horse, trainer and jockey. On Derby Day, Vain won the 1200 metre Craven A Stakes (Salinger Stakes) by 12 lengths, carrying 51 kgs against older horses in the open handicap. On Oaks Day, the Linlithgow Stakes (Patinack Farm Classic) of 1400 metres, was closer, Vain's winning margin being a mere seven lengths.

The final day's George Adams Handicap (Emirates Stakes) of 1600 metres saw 55.5 kgs on Vain's back, 4.5 kgs over weight for age. It was his longest-ever race and his victory by 1 and ¾ lengths may have had even more merit than his 12-length win eight days earlier. All racing people know this extraordinary feat will never be repeated.

Not one to seek the limelight, Jim Moloney's post-race interviews were full of modesty and manners, an example to all in sport. His humility and dignified demeanor impressed all, and contributed to polishing the image of racing across Australia. He had few journalists and media people on his Christmas card list but he was always warm in recalling his partnership with the equally loyal Hyland.

Jim said, "A doctor owner had a promising horse with me and asked me to engage another jockey. I gently explained that for horses trained by me, P. Hyland was the rider. There was a polite exchange of letters, and the horse was moved to another trainer, as was his right. But I had my stable rules."

There was other success in big races, a win with Arctic Symbol (1970 Sydney Cup), Roms Stiletto (1982 VRC Oaks), (Affinity 1984 Caulfield Cup), Raveneaux (1986 Victoria Derby), among others. He trained the winners of three Caulfield Guineas.

Jim was active in the Victorian Trainers Association for many years, seeking only to advance the interests of trainers of thoroughbreds and the sport itself. His quiet, measured and professional advice has been available to all who have made his acquaintance. To his great credit and part of his enviable reputation was his placement of the best welfare interests of his horses above all other factors.

Jim's influence is reflected in the professionalism and integrity of his sons, respected Caulfield trainers John and Gerard. After his retirement he could be found at the stables most days, watching, listening, advising, and chopping up carrots to include in the afternoon feed.

His devotion to wife Pauline and to children John, Gerard, Des (a priest), Karen, Clare, Anne and Bernadette, his interest in his 12 grandchildren, and his support for the Catholic church were obvious.

This was encapsulated at the morning tea induction to the Racing Hall of Fame at his bayside nursing home. Joined by three panel members of the hall, his children and a handful of close friends, Jim said that he "felt like a parson", and that the day was "made more special by sharing this little ceremony with family and friends".

Alan McLean is a friend of the Moloney family.