Youl Thrashem Does Just That at Seymour

Bromes Gets The Nod At Ararat

Bromes made the trip up the Western Highway worthwhile for connections on ...Read More

Black Opal proved too strong in the wet conditions on Saturday at ...Read More

Apologies for the absence of news updates these past 6 weeks, as I took ...Read More

It was a brilliant week for Moloney Racing with four winners from the team, ...Read More

Pierro mare, Pure, continued her recent hot form at Benalla on Tuesday when she ...Read More

Australia Day brought many cheers and smiles for the Moloney Camp, ...Read More

Pure Flying at The Creek

The John and Paul Shannon owned, Pure, capped off a great weekend for Team ...Read More

The Regiment Breaks His Drought

Consistent money-spinner, The Regiment, broke through for a well-deserved win ...Read More

Big Night Out For Imperial Lad

It was celebrations all around on Saturday night at the tri-code meeting ...Read More

Fine Dane proved that he is maturing into a class sprinter ...Read More

Four-year-old, Sir Harald, brought up his second win from 15 starts at Sale on ...Read More

Promising 3-year-old, Legionnaire, gained many admirers on Saturday when he ...Read More

Fine Dane Back With A Bang!

The biggest turn around in form recently at Moloney Racing has to be rewarded ...Read More

While the boss was having a well-deserved break and working on his ...Read More

Brunot Blitzes Them At Ballarat

Exciting two-year-old, Brunot, brought up a second win for the Moloney ...Read More

Can't Remember certainly made sure he wasn't forgotten on Friday, when he ...Read More

Sunday Pray Gets The Bob at Headquarters

It was almost déjà vu for the connections of Sunday Pray on ...Read More

3-year-old, Adversary, is proving to be a rising talent for the Moloney ...Read More

Their Caulfield training base is ideally located for horses to be placed in races around Victoria and if good enough beyond those borders.

We are a "hands on" stable with well over 100 years of combined experience and welcome the opportunity to greet new business.

Youl Thrashem Does Just That at Seymour

May 21, 2020 The Gerard Moloney trained, Youl Thrashem, brought up her fourth career victory from 28 starts on Thursday at Seymour, taking out the BM58 Handicap over 1100 meters.Given a
Read More →

Bromes Gets The Nod At Ararat

Apr 20, 2020 Bromes made the trip up the Western Highway worthwhile for connections on Saturday, taking out the 1600m Bob Barr Smith 0-58 Handicap with jockey, Jarrod Fry,
Read More → 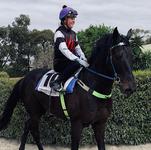 Apr 19, 2020 Moloney Racing apprentice, Tayla Childs, will have her long-awaited race-riding debut at Mornington on Monday, partnering the John Moloney-trained, Black Opal, in the last race on
Read More →

Apr 06, 2020 Black Opal proved too strong in the wet conditions on Saturday at Werribee, leading from start to finish to take out the Cor Cordis 0-58 Handicap over 1100m.Rarely
Read More →
More News